Well the planning has begun in earnest now.
We have ordered the relevant maps, had a look through the route we would like to take and made sure the planes are all serviceable! Despite our best efforts FOXA is still spending it’s last few days in the maintenance hangar 🙁 although I suppose it’s less likely to get damaged there!

While performing the planning there is always a need to remain flexible as there are numerous outside influences we have little control over, the weather generally being the biggest plan breaker!

Current plan is to head to Annecy for the first night, then to drop in a cannes and onto Calvi for the second night, spend 3 nights there and then take the mountain passes up to Innsbruck and then onto Friedrichshafen for the 5th night.
Its all a surprise after that but maybe into Oostende with a stop over in Brugges!

So the day has finally arrived! It’s a beautiful morning, not a cloud in the sky and already I’m nervous with anticipation!
I’m not a seasoned tourer really so each trip involves some trepidation and just a little self doubt which to be fair is probably a good thing! This time I am using SkyDemon for flight planning, so let’s see how we get on!

So we wander into the hangar to check the planes over and I’m surprised to find that BZPI isn’t there, surely Kevin hasn’t left early and not said anything?

We soon discover that is not the case when he arrives and is as surprised as us to find his aircraft isn’t there! For crying out loud were not even off the ground yet and half the aircraft don’t appear to be fit for action!
So it transpires that the maintenance organisation had taken it upon themselves to start BZPI’s annual the day before, so it was in fact, in pieces in the workshop!
FOXA was quickly sorted by swiftair and they were on their way shortly after. Not long after that we left in JDEE and the cirrus was soon after.

It was a fairly uneventful flight down to Troyes other than actually working out how to pronounce Troyes, which actually sounds like trois, the number 3 in French.

Well we’re here in Annecy, the weather is stunning although we did have to negotiate some thunder clouds on the way through.
Unfortunately Kevin and Carol in BZPI didn’t make it as theor TB20 only made it back on parade mid afternoon, however they did manage to make it down to Auxerre with the plan to meet us in Cannes.

The routes I compiled using SkyDemon worked a treat however I now need a travel printer to continue using the plogs for the remainder of the trip. 🙁

Yesterday evening was a collaboration of all the time we’ve spent planning the trip and we had a great night eating, drinking and socialising.
We stayed at the Allobroges hotel which was a great start to the holiday.
The old town in annecy is stunning and we spent far too long walking around sampling the bars until the small hours.

Today we’re planning to take the scenic route through the valley over to Cannes then a 30 min hop across the pond and into Calvi. Lifejackets on and a small good luck prayer to the lycoming gods! 🙂 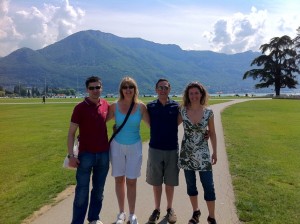 Well, what a stunning flight! We followed the road down to Grenoble and then went west toward Lyon and down around the mountains until we were due north of Cannes where we turned south and headed out over the water toward corsica!
After a 30 minute water hop we orbited for what seemed like hours,(it was about 20 mins) before descending into Calvi . What a beautiful view!

We finally managed to meet up with Kevin and Carol who had made it in from Cannes where they had stopped for lunch and met up with the FOXA crew and once we’d had a look around and been for a shower we walked into town for dinner where we all proceeded to drink far too much vino, mojito’s and other intoxicating drinks!

Leicester to Annecy via Troyes : 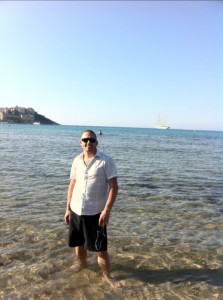 I think everyone had earned a well deserved rest so we spent the day lounging by the pool, generally letting our hair down (what little we have 🙂 ) and settling in to our holiday proper!
The villa’s were a fantastic choice and were beautifully appointed, they looked like they’d only recently been refurbished so I think we caught them at a good time, plus due to it being out of season they were great value.

Kev and Carol went into town and collected a hire car so we had some transport, we then went to get some provisions and has a lovely BBQ at the villa washed down with a small amount of bière and vino :-).

Time to do some more flying today.
We decided to lunch at a restaurant on the island of Elba, which was a short 40 min flight to the east and into Italy, where we had a great lunch before heading back to Calvi and some more relaxing.
We went for a paddle in the sea, which turned into a team swim session and watched the FOXA crew pass overhead before arriving back into Calvi themselves.
After fetching the buoys from the airfield we went back to the beach and had a couple of beers before heading back to the villas. We bought far too much food yesterday so we had another BBQ to use up the remaining overstock.

And then the flight planning started…its probably the most demanding day for flying tomorrow so time to check the met reports and have a look through the charts.

Another episode of the corsica docu-soap ensued with Pete running through all the video footage he’d taken that day, oh how we laughed…mostly at ourselves 😉

Well its finally here, the day we’ve all been looking forward to with a little anxiety. The flight through the alps is certainly going to be breathtaking whatever happens.

So it was an early start today and with the FOXA crew due to be the first away, they were up with the lark at 7:30 and unfortunately they even missed breakfast…unlucky, it was nice too 🙂
The rest of the morning was a bit of a blur as people rushed around trying to get all their gear together before heading off for the next leg of the trip. When the last of the other crews had departed we finished checking out of the apartments and headed toward the airport, on the way we stopped so Chunky Cheek could get himself some liquid based food supplements as it was the only thing he could manage for about 2 days!
When we arrived at the airport I dropped the other EE occupants and returned the car to the rental depot before heading back to prep for the flight.
Once we’d filed the flight plan and headed out to EE, I discovered all the other aircraft still on the apron, oh well at least I enjoyed your breakfast!

The start of the flight was fairly straightforward and as we coasted out toward Pisa, a quick prayer to the lycoming gods and we were on our way for a 30 min hop over the drink! As we started to near the Italian coast it was fairly obvious their view on GA was quite different to the other paces I’d been in mainland Europe i.e. they mostly didn’t give a shit!
We started to make our own way through, round, under and any other route we could through the Italian airspace as they weren’t particularly helpful, in fact I think its fair to say if they weren’t there at all at least we would have known what we were dealing with! We headed up over the coastal mountain range at Pisa and then down to the flat lands beyond where we routed toward Lake Garda. We followed the Eastern shore of the lake and started up the valley towards the Alps where the views were magnificent, as you can see from the piccies! 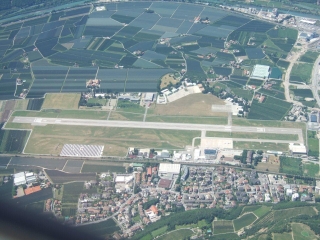 We flew at roughly 5700′ as this would provide adequate clearance all the way through to Innsbruck.
As expected radio comms were intermittent in the valley (yes even worse than when we were over flatland Italy!) until we reached Bolzano, who were happy to chat and we routed East abeam their airfield, which had a few aircraft in the circuit.
As we headed up into the Brenner pass and over into Austria we could clearly see the border control on the E45 below.

We continued winding up the valley until the ground started to flatten out and we could see Innsbruck town in the distance.
Following a quick bite we filed the next plan and headed back to the aircraft for the next leg over to Friedrichshafen.