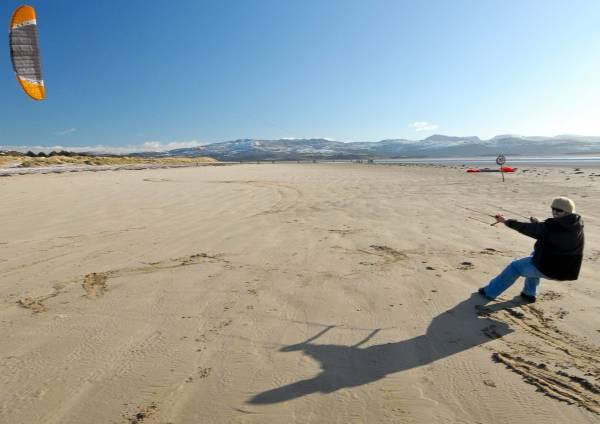 I was invited to join the FBI crew on their first 2010 road trip.
The destination was Black Rock Sands, Porthmadog in Wales and the intention was lots of hardcore kiting!.

Warbs and I had an early start leaving Leicester at 06:30 on Saturday morning and following an interesting climb through Snowdonia, with a quick stop for relief and a photo opportunity

arrived in Bala for a greasy breakfast at 09:00.
After our sustenance stop it was only a 40 min drive to Porthmadog, Warbs and I finally arrived at BRS about 10:00. Unfortunately there was a distinct lack of wind, so we cracked open a few tins 😉
We spent the rest of the day in eager anticipation playing around with the equipment but to no avail.
As the sun faded and it started to cool off, we sunk a couple of tins and watched the sun go down.
We all made our way back to the digs, showered and went out for a great meal, which we obviously followed up with a few more scoops ;-).
The next morning the wind didn’t appear to be any better so we had a casual breakfast and made our way back to the beach to sit it out.

Just after lunch we were contemplating packing up when we noticed the first whispers of wind, bring it on!

Within minutes there must have been about 5 kites in the air, buggy’s were starting to roll and land boards being strapped on. A couple of the guys even donned dry suits and took to the water…..brrr.

We managed about two and a half hours before the wind dropped off and the sun started to fade.
All in all it turned out to be a great day.

I'm a Technical Architect for a large distribution company, it means I get to build big computers :-) I am an avid pilot and am hoping to compete in this years inaugural Intermediate level world championship in South Africa. I enjoy most kite sports and yet again am looking to improve my kite surfing this summer.